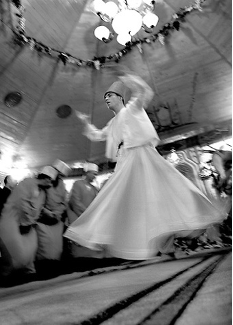 Exhibits are FREE and Open to the Public

*We encourage visitors to verify gallery hours due to events and activities that may temporarily prevent gallery access, especially around the holidays. To verify hours, call the Box Office at 419.423.2787 ext 100.

Burim Myftiu’s exhibit, Trance, portrays the Islamic tradition of the Dervish trance ritual. According to Myftiu, “Kosovo is multi-national and multi-confessional country. After the war I started photographing the religions and rituals in Kosovo. Trance is a part of a long-term project called Rituals. Trance is about Sufi rituals, their philosophy, state of mind and trance.”

In 2018, Myftiu visited the University of Findlay campus, and Trance was exhibited at the Lea Gallery. In addition to his work as a photographer, Myftiu has also served as a local interpreter at Camp Bondsteel, a KFOR/US Army base located in Kosovo. While at the University, Myftiu presented a lecture on the Kosovo war and the American and multi-national presence in Kosovo since 1999 and presented an artist talk about his photographic work. Myftiu generously donated the photographs in the Trance exhibit to the University of Findlay, and the University is pleased to have the opportunity to exhibit his work at the Fisher Wall Gallery.